For the March edition of InStyle Magazine, 51 year old supermodel Cindy Crawford pays homage to the late Giovanni Versace, 20 years after his murder.

She talks about how she met the Versaces, what Gianni stood for and her early days with Naomi Campbell and other supermodels. Donatella  also describes the role she played in the early days of their brand,  and the tribute collection.

On meeting the Versaces

“Crawford remembers meeting the Versaces for the first time when she was photographed for a campaign by Richard Avedon in New York in the 1980s and then came to know them more closely as she traveled to Milan for the shows, often as a Versace exclusive. In those days models often stayed in the same hotel, shared cars, and even carried their own makeup kits. Linda Evangelista could do her own eyebrows better than anyone else, Crawford says. Often they would sit around on the floor backstage getting ready, young women forming an unlikely bond at a perfect moment when fashion was changing.”

“Gianni loved women and wanted them to feel beautiful in the clothes,” Crawford says. “Donatella was probably his first muse. She was always around, helping choose what we would wear and what she thought was important to him.” 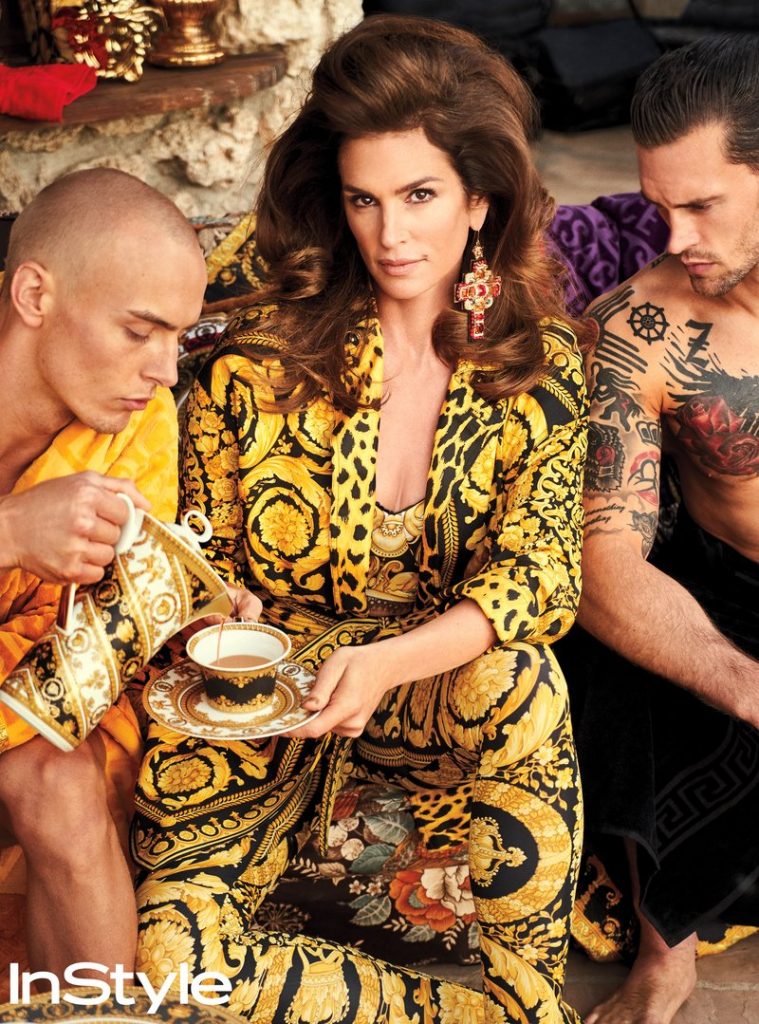 Donatella Versace describes her earlier role as more behind-the-scenes, although she was already widely known to the fashion press as a glamorous hostess. “I was the one who pushed Gianni to do things his own way, to break the rules,” she says. But with his sudden absence, she found herself thrust into the spotlight, and, in her own words, “I had to put on a mask. I had to be strong for me, for my children, for all the people who worked at Versace.”

Finding the strength to use her voice was a process that took many years, filled with setbacks and mistakes, a public reckoning with drug addiction, but also moments of success. It was her easy relationship with megastars that led to some of the most indelible moments in the company’s history, like shows with performances by Prince and Tupac Shakur. At the men’s shows in January, she partied with 2 Chainz. When asked what they could possibly have in common, Versace responds, “We talk about life.”

“I admit I was very insecure for a long time, but today no more,” Versace says. “Maybe it was the tribute collection that finally freed me of the burden I had and made me see the light, but I can say I feel liberated from the demons of the past. I am stronger and more focused.”

Read the full story on Instyle.com