singer Elton John has revealed his beloved mother Sheila has passed away  at age 92, months after they healed their long and painful rift.

Last year Sir Elton said: ‘I don’t miss her. When she says things in the press, like, “I haven’t spoken to Elton since he married that f****** a****** David Furnish”. That was pretty hard to take’.

He added: ‘I don’t hate my mother. I look after her but I don’t want her in my life.’

But they made up fully around six months ago, shortly after he was hospitalised for 12 days, including two nights in intensive care, after picking up a serious infection while touring South America.

In May he confirmed they were close again after he shared a throwback picture on Twitter to celebrate reconnecting with Mrs Farebrother on America’s Mother’s Day. ‘So happy we are back in touch. Love, Elton.’ 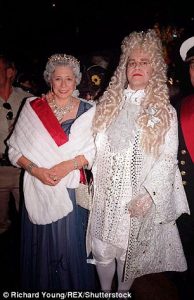