President Trump sends out a warning tweet to  Kim jong Un and North Korea Tuesday night, as he taunts Kim jong Un who said in his New Year speech that Americans should be aware he has a ‘button’ for nuclear weapons.

Trump warned the hermit country: ‘North Korean Leader Kim Jong-Un just stated that the ”Nuclear Button is on his desk at all times.” Will someone from his depleted and food starved regime please inform him that I too have a Nuclear Button, but it is a much bigger & more powerful one than his, and my Button works!’

The threat came after an annual speech given by Kim, in which he cautioned: ‘The U.S. should know that the button for nuclear weapons is on my table.’

Kim warned America that it can ‘never start a war against me and our country’ and insisted his nukes are now a reality, not a threat. 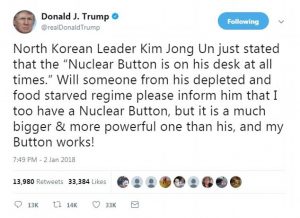