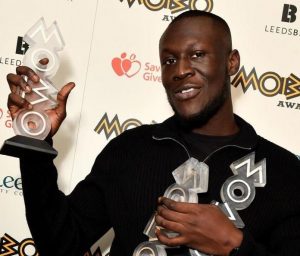 Last night, the 22nd MOBO Awards held at the First Direct Arena in Leeds, United Kingdom. The ceremony saw Stormzy add to his growing awards haul as he picked up three out of a possible five gongs at this year’s MOBO Awards.

The London-born artist dominated the star-studded ceremony as he fought off competition from Sampha, J Hus and Skepta to be crowned Best Male Act and Best Grime Act.  He also picked up the coveted Best Album gong for his debut Gang Signs & Prayer.

See the Full list of 2017 MOBO Awards winners below…