The award was conferred on Elumelu in recognition of his outstanding work in promoting Entrepreneurship on the continent of Africa and across the globe. Elumelu, himself a serial entrepreneur, through his Tony Elumelu Foundation, has funded over 3,000 African entrepreneurs to date with his U$D100 million ccommitment to 10,000 entrepreneurs over a period of 10 years. These entrepreneurs are expected to create a million new jobs and over U$D10 billion in revenue as a result of the initiative of Elumelu’s Foundation. 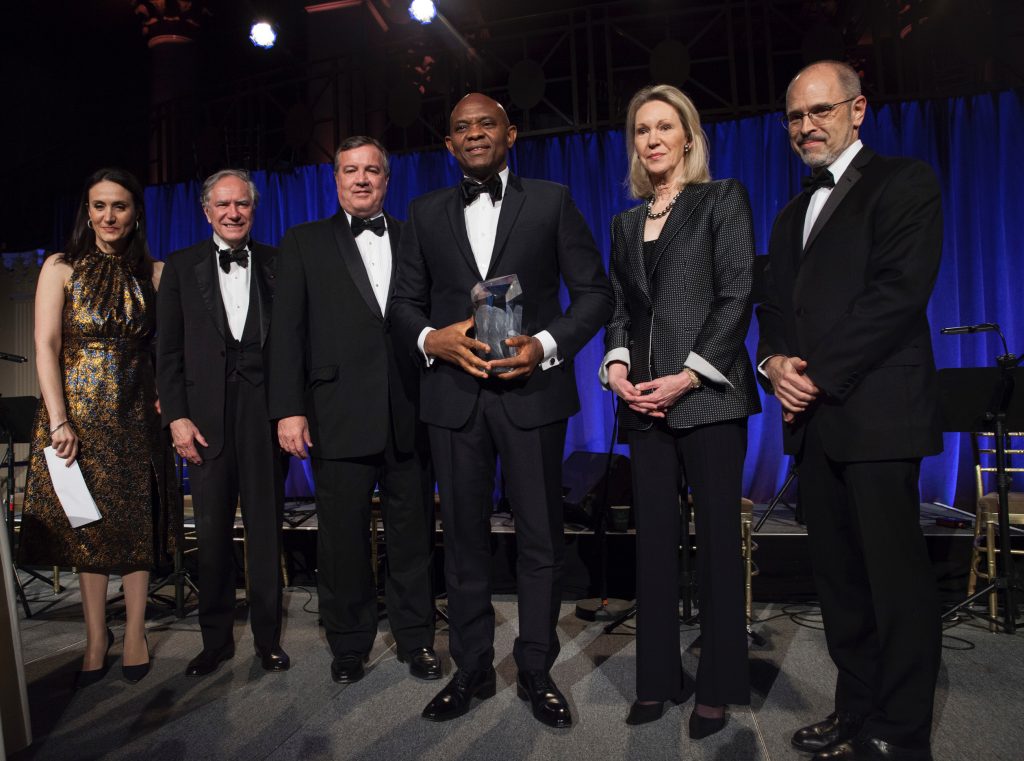 At the award’s gala, former American President George W. Bush, acknowledged the efforts of the African entrepreneur saying ‘I am impressed with Tony’s philanthropic initiatives which are powering job creation and entrepreneurship in a region(Africa), that is very dear to Laura and me.  To receive an award founded by President Eisenhower, has added meaning. Eisenhower provided example in leadership, which we can all learn from. Additionally, his belief in promoting international understanding is a vitally important responsibility.

Speaking on the reason why Elumelu was selected as the recipient of this prestigious award, Peter Tichansky, the CEO of BCIU said ‘Mr Elumelu’s bold approach and can-do mindset are exemplary characteristics of a visionary entrepreneur. He embodies the idea that companies must take the lead in bringing business and society together. His advocacy is proving that businesses, acting as businesses and not charitable donors, are the most powerful force for addressing social challenges and economic development’

Indeed this is the philosophy of Elumelu, founder of the concept of Africapitalism, which essentially states that Africa’s private sector must play a leading role in the development and growth of the continent as both governments and the private sector come together to make this happen.

Elumelu who was presented his award by Kip Forbes and Anne Eisenhower(the granddaughter of President Eisenhower,) in his acceptance speech stated: ‘President Eisenhower was a man of many dimensions and most important is his leadership. Being recognized today as a recipient of the inaugural global entrepreneurship award is an honour that resonates with so many people in Africa. What our entrepreneurs in Africa need is powerful leadership to further energise, encourage and motivate them to transform the continent.’ He went on to say ‘ I hope this will further spur on other Africans and friends of Africa, to make sure we work together for an inclusive prosperity’.

Elumelu dedicated his award to his wife and children as well as the staff of UBA, Transcorp, Heirs Holdings, the Tony Elumelu Foundation and all the other companies within his group of companies. He thanked BCIU on behalf of entrepreneurs in Africa: ‘On behalf of the over 3000 entrepreneurs who have benefitted from the Tony Elumelu Foundation Entrepreneurship programme, I say thank you very much.

The award ceremony and gala took place at the historic venue, the Cipriani on Wall street in New York