The Golden Globes kicks off award season this year and while some celebrities came off the holidays dazzling like our new favorite Christmas ornaments some others looked eerily similar to discarded Christmas wrappings. Push up those dramatic sleeves and let us take a power walk through the red carpet.

Cynthia Erivo Casually Reminds Us of Our Bank Account Balance:

If we’re being honest and we usually are, Cynthia saying she should have worn jeans made us simultaneously side eye so hard we could see the back of our skulls and nod in agreement over a mouthful of salty chips because she wasn’t wrong. Her modern take on the vintage Hollywood silhouette is pure old money with a sequined Thom Browne black and white dress that took 800 hours to make. Add that to the $5 million worth jewelry ($3 million on a sapphire and diamond Bulgari necklace alone), it is painfully obvious that Cynthia came a little bit more prepared that almost anyone else. We hate the word ‘stan’ but in the face of greatness we just have to. 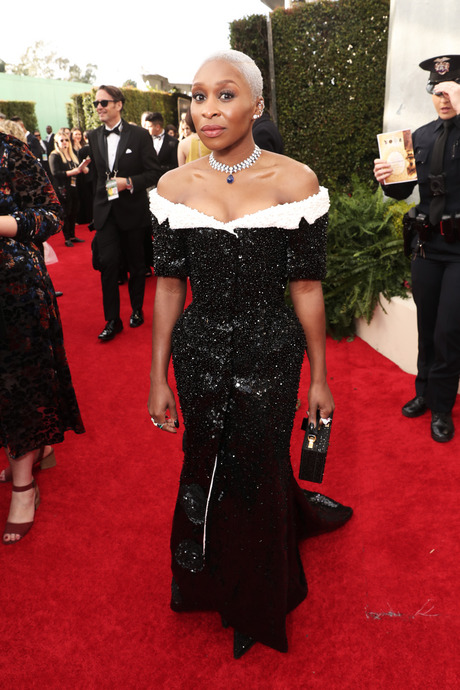 Jennifer Lopez is in Love with Christmas Left Overs:

Jennifer was supposed to start this year with a bang. We. Were. Rooting. For. You. Instead what we got was Jennifer gift wrapped in a gigantic gold and green bow even that felt overpowering as detailing to a crinkled white Valentino ball gown. J. Lo’s look is the biggest disappointment of the Golden Globes probably because we had such high hopes. It’s not too late J. Lo, please blow us away. We are still rooting for you. 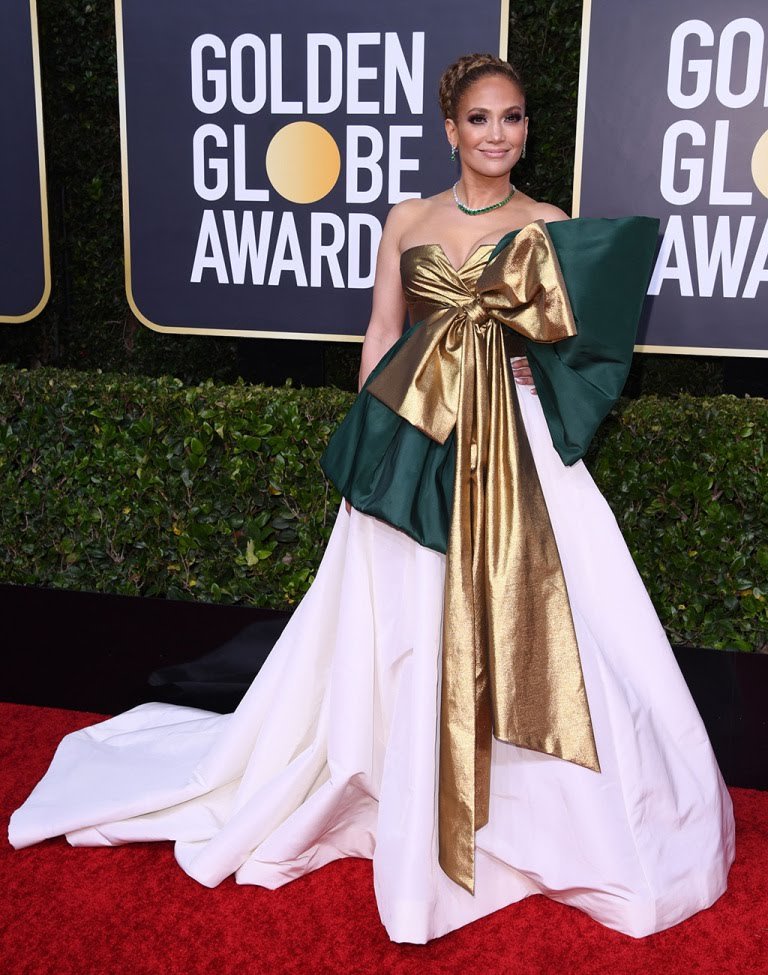 Billy Porter wearing a traditional black tux is a sure sign that the world as we know it is ending. Thankfully for world peace the crown of most dramatic outfits still rest prettily on his head. The star wore an Alex Vinash number with along feathered white train that made us hear the angels sing. Of course he paired with sparkly Jimmy Choo shoes with square toes paying homage to the 90s. as always Billy’s look is fun, fresh and glam and he came early because he knew we needed time to pick our jaws off the floor and wipe up the drool. 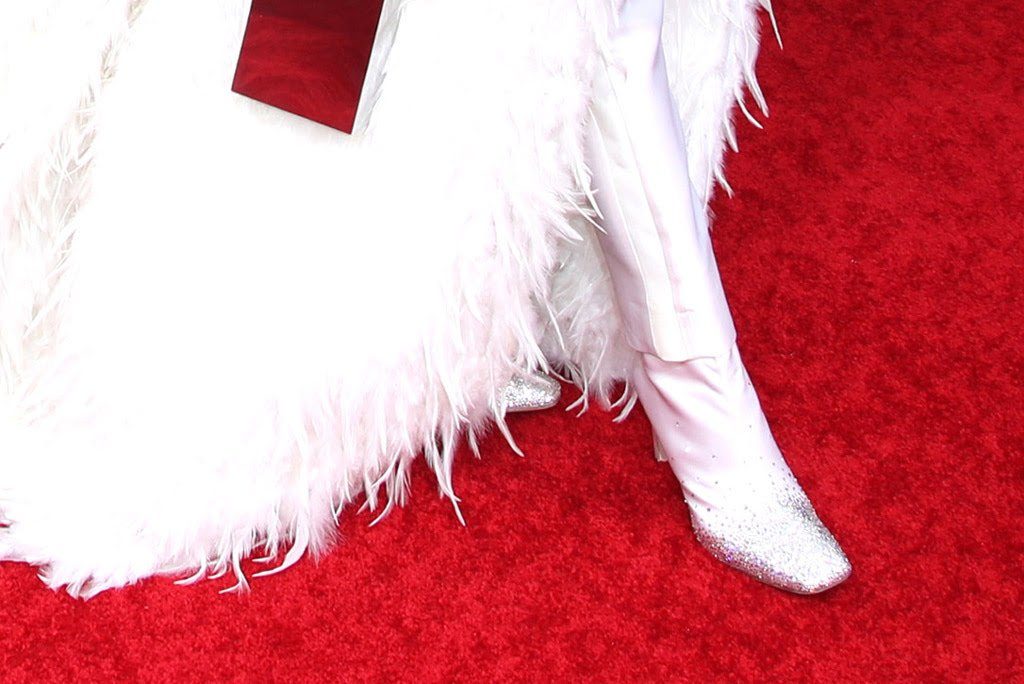 A boho inspired long brown dress with sheer paneling and almost bare backside designed by Fendi sounds like the stuff bohemian dreams are made of right? Wrong. Gwyneth Paltrow manages to look both dated and risqué in this outfit in a confusing combination of old-fashioned Victorian nightie and the makings of the very strict high necked dress. We don’t know what is going on, we cannot  explain it, we can only say that whatever it is, we do not like it. 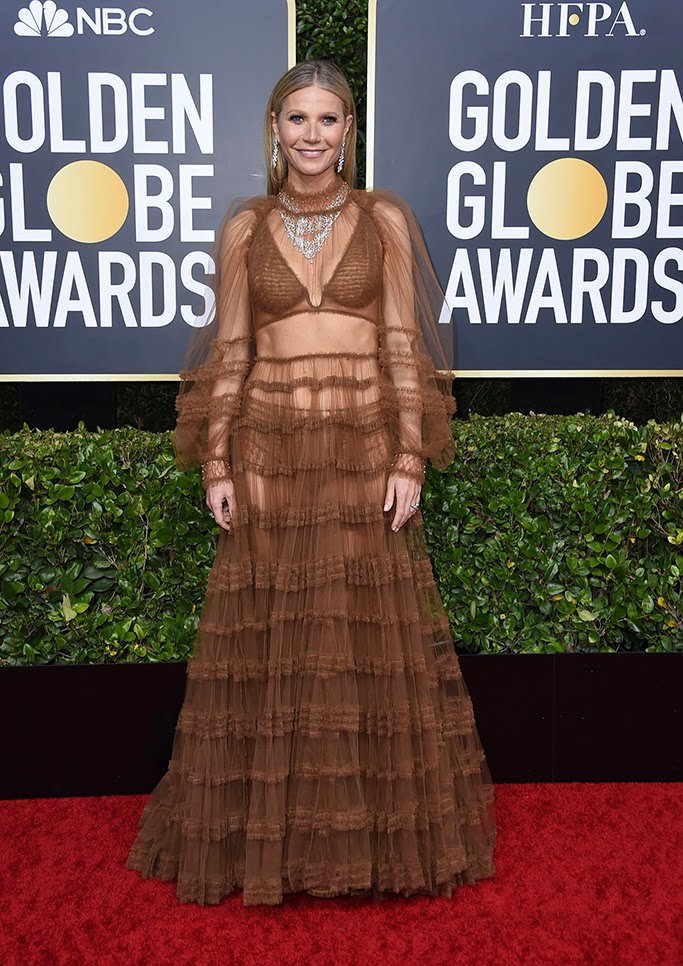 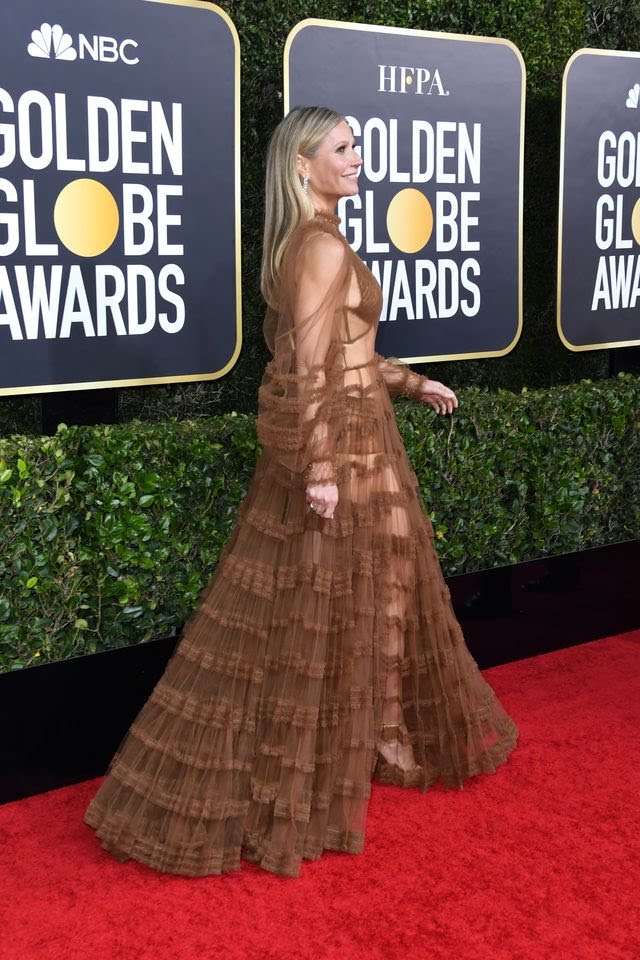 Iris Van Herpen is not a designer for the weak. The dutch designer is the brain behind that iconic Gwendoyln Christie woman on fire look so the fact that Joey King who usually sticks with safer pieces decided to strike out in such an eye-catching dress first major red carpet of the year is, we hope, a sign of bolder things to come. We love it, Ms King looks so grown and beautiful and if she keeps this up, she might just sashay her way into our absolute favorite stars to watch. 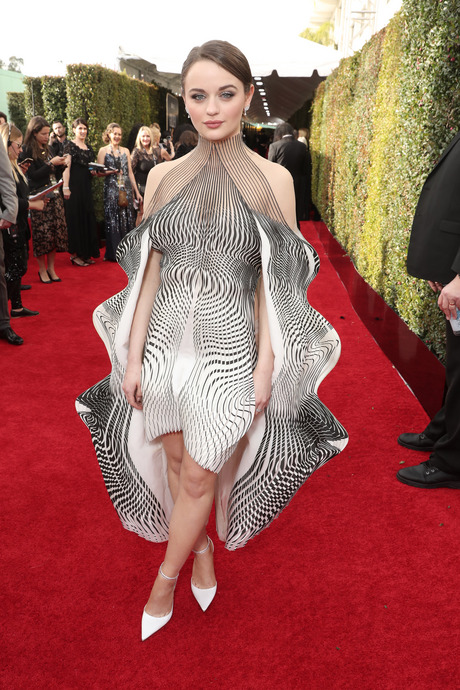 Statement sleeves are the new hot red carpet trend and while it is hard to pull off, if you’re going to go down that road do it right because we will make no excuses for you. Jodie Comer in this Mary Katranzou satin number did not pull it off. The sleeves were the only part of this dress properly done and even those were massive in a bad way. The dress lacked any discernable shape with wonky stitching at the hem that had the dress looking like some intern did a terrible starch job and don’t get us started on the boob wrinkles. We’ve tilted our heads and no matter what angle we look at this from, we still don’t get it. 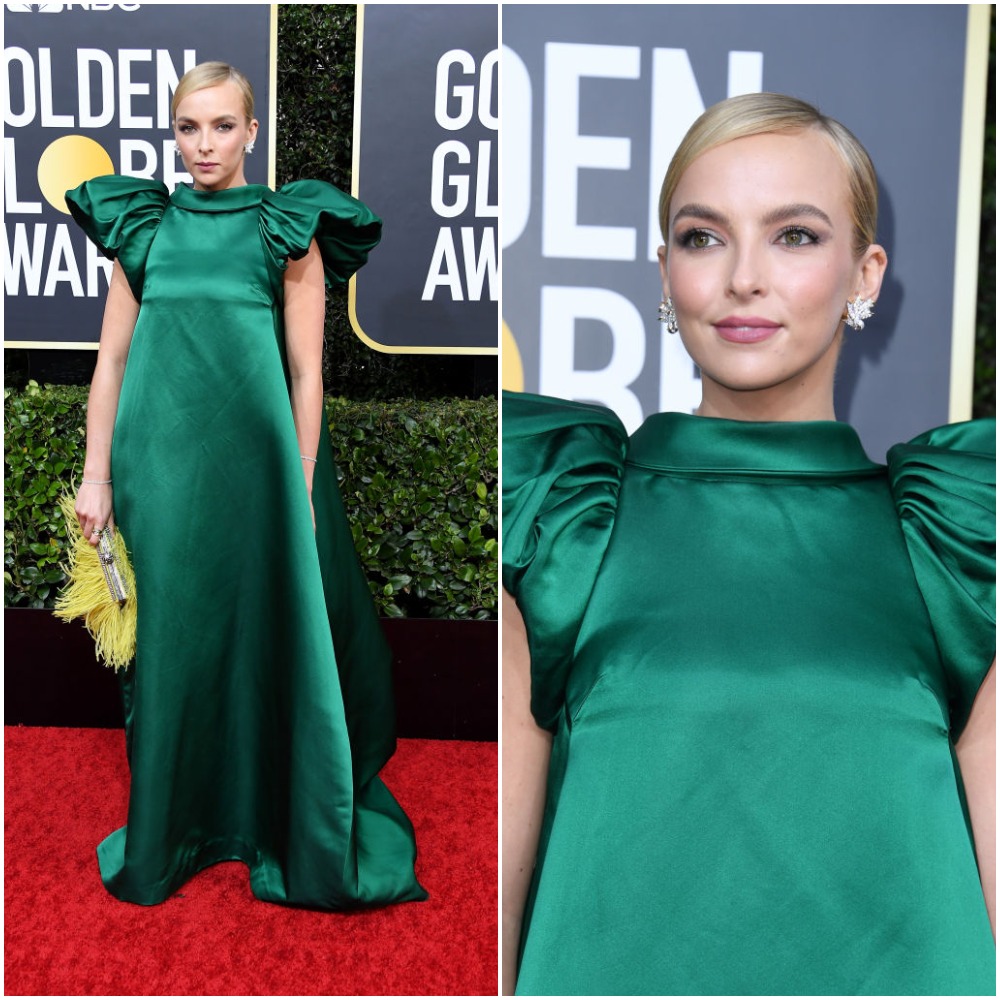 Now this is how you do dramatic sleeves like a pro. Now don’t get us wrong, this not a dress anyone can pull off. With its yellow hue and small pleats it does look a lot like a potato chip, then you add in dramatic sleeves and what looks like a wonder woman jeweled bra, it should not work but it does. So designer Mary Katranzou either gets it weirdly right or very very wrong but either way Cate smashed this look out of the park. 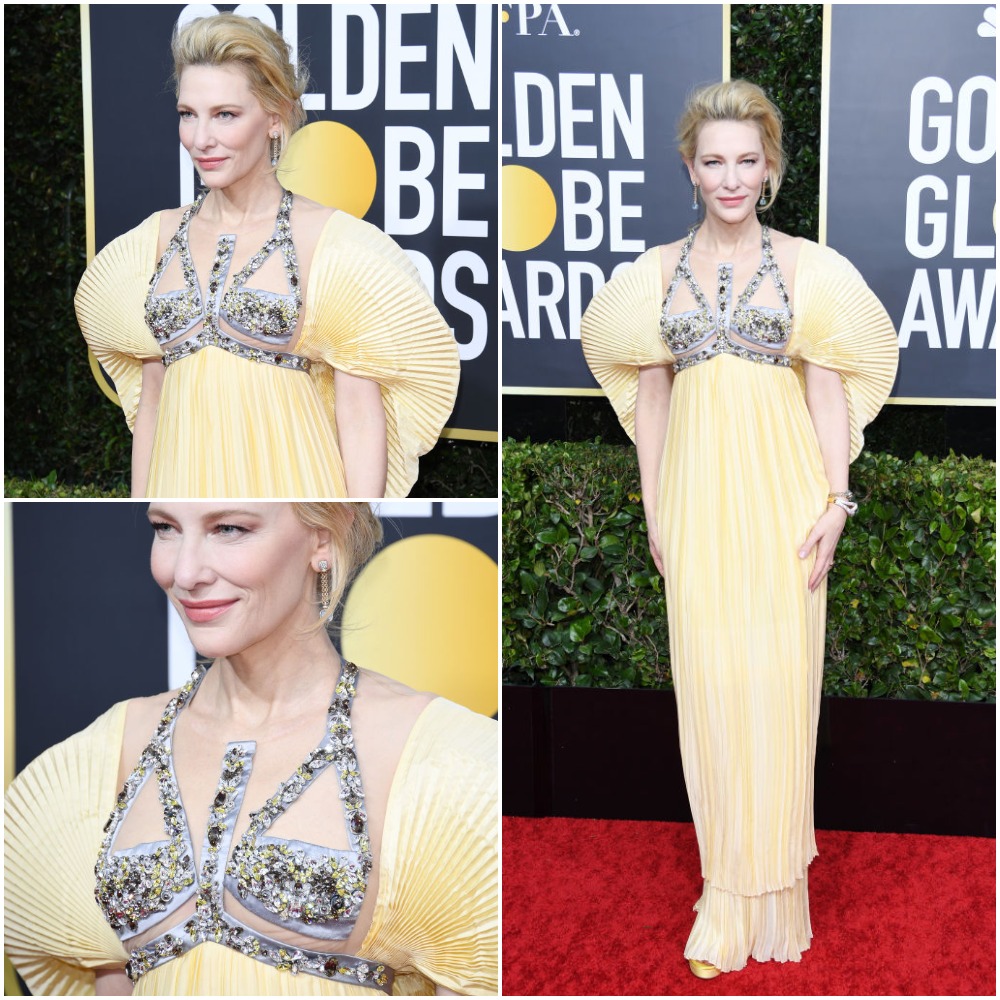 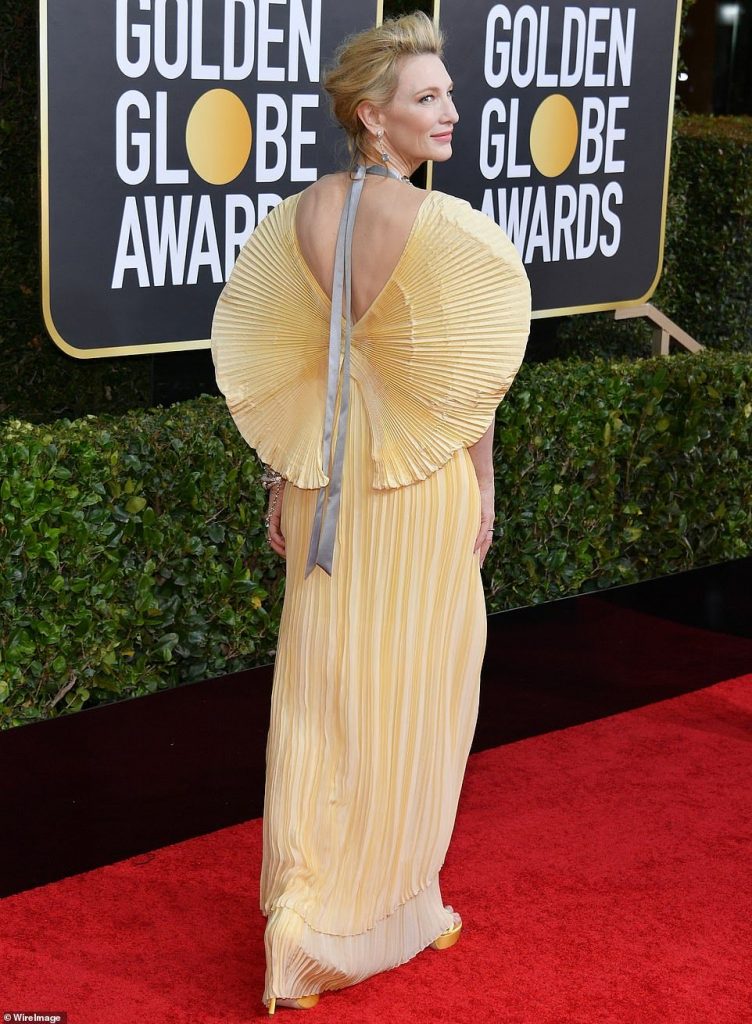 Salma Hayek in her Boobed Glory:

This Gucci ensemble is the thing wardrobe malfunction nightmares are made of. I mean we know she is married to the gazillionaire who owns Gucci so her toothbrush is probably emblazoned with a small g and she probably has to step out on all the red carpets wearing Gucci as some likely unspoken vows part of the marriage contract but… This dress looks so small that if Salma had gotten an irresistible urge to sneeze in this number we will probably have something to talk about for the next decade. Something undeniably booby… yikes! 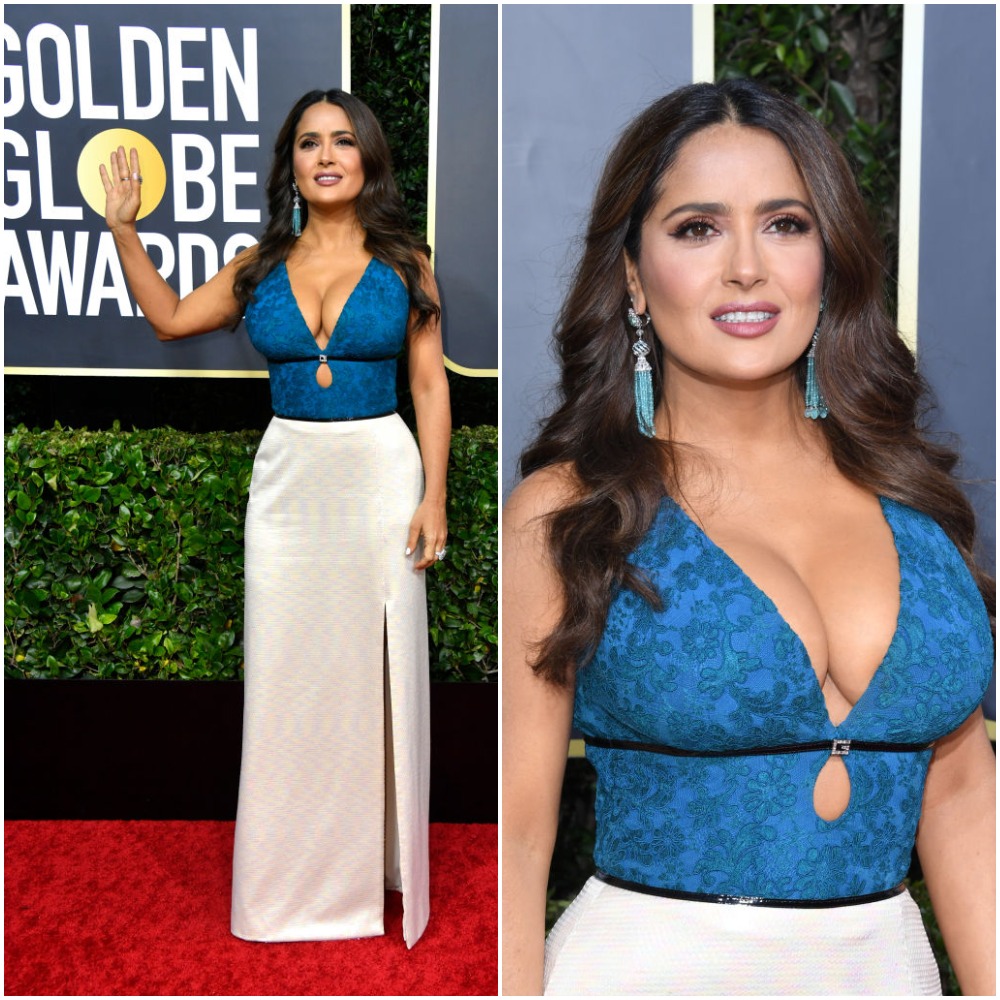 Phoebe Waller-Bridge in a Sequined Suit:

Phoebe kills this look with the easy attitude of her titular character Fleabag. The menswear trend is here to stay and she pulls it off with the gritty sexiness that we have come to know and love. 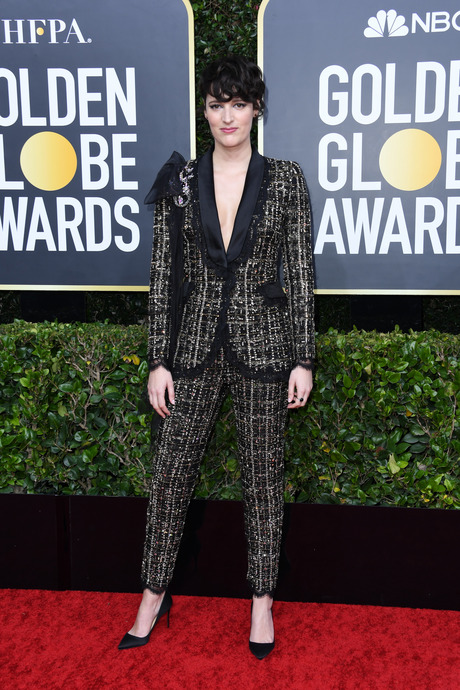 Do we like this look? No. Are bejeweled harnesses instead of blouses now a thing? We hope not but maybe get your boob tape ready just in case. 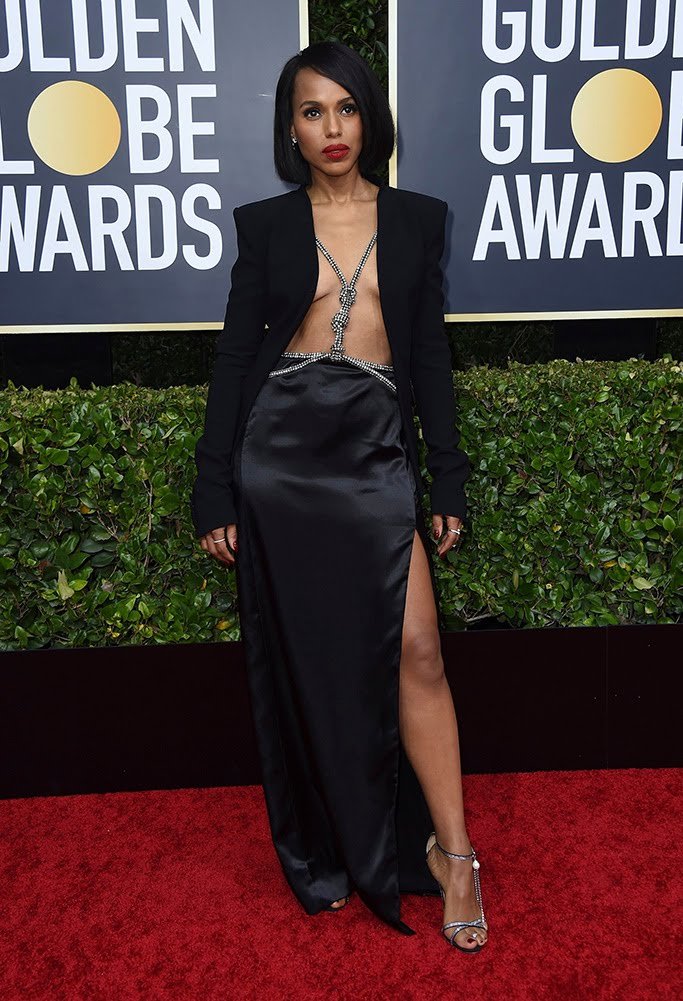 Wesley Snipes is a Burgundy Delight:

Wesley wore a burgundy suit with a pink ruffled shirt and it worked you guys. Was it tacky? Yes it was. It looked a bit like you let your country cousin from the village run amok in a tux shop with stunning results. It should not look as good as it does but yet it does. 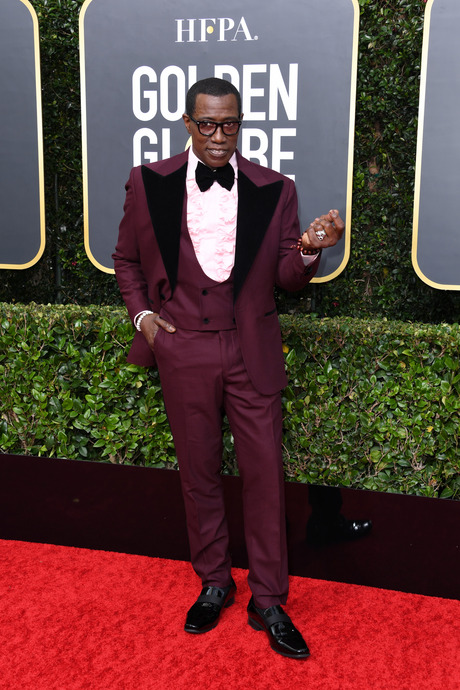 Reese Witherspoon is underwhelming in white:

The top half of this gown looks like an uninspired attempt to fold a napkin and the bottom half is forgettable. We sure hope Reese does not show up to the Morning Show dressed like this. Meh. 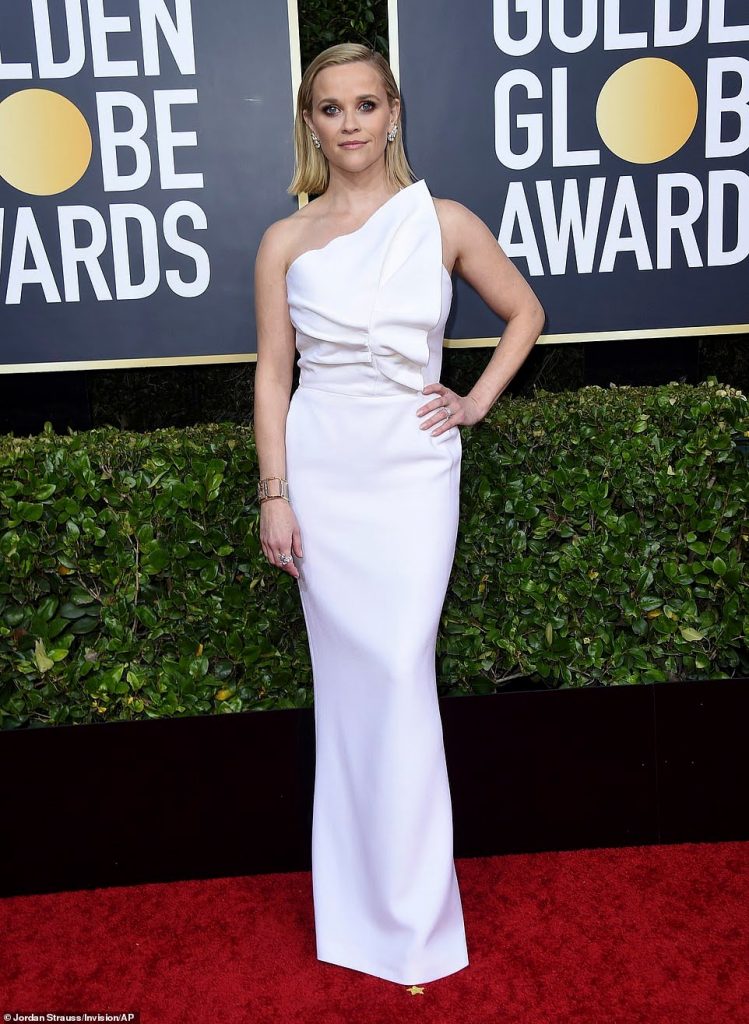 Zoey Deutch is Radiant in Yellow:

We have never wanted a bright yellow jumpsuit more in our entire existence. This Fendi creation with voluminous sleeves and wide legs is not only very on trend, it’s a fresh take on it. Zoey pairs the jumpsuit with gorgeous blue jewelry and teaches us that color when done right is always a friend. 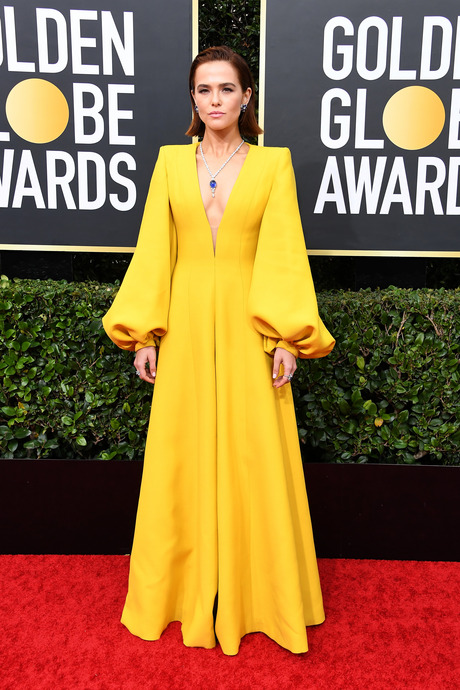 Charlize Theron shows up Half Dressed:

What in the name of Christ-ian were the people at Dior thinking when they let Charlize walk the red carpet in an unfinished dress? This green draping on the dress looks like it might fall which would be bad because the other half of the dress looks suspiciously like lingerie. Charlize does not deserved to be played this way. 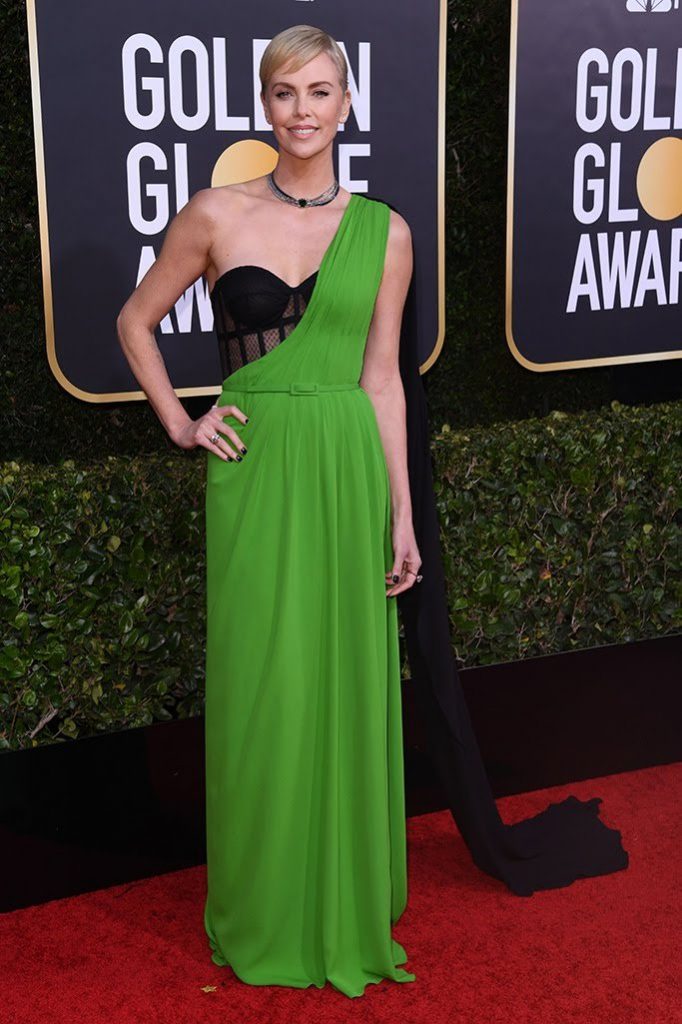