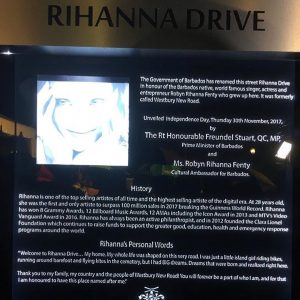 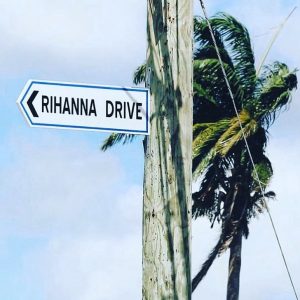 Many celebrities have awards. Many celebrities have awards and something named after them—maybe a charity, or a grant, perhaps even a statue or a star on the Walk of Fame. But most celebrities never achieve the ultimate fame hallmark: a street. Katharine Hepburn has one. Judy Garland and Fred Astaire do, too. And now, Rihanna, international superstar and ultimate rocker of yeti boots, joins the exclusive and elusive club. On Barbados Independence Day, the government of Barbados has renamed the street she grew up on to Rihanna Drive.

Rih is already a cultural ambassador for her home country and made headlines over the summer with her Crop Over Festival appearance there. Last Independence Day, she and Prince Harry spread awareness on behalf of the National HIV/AIDS Commission. She was there again this year amid pouring rain for the opening ceremony of her street.

The government of Barbados deserves some major credit for having their pulse on the zeitgeist here because, obviously, the street couldn’t have been “Rihanna Circle” or “Rihanna Way.” It obviously needed to be Drive so people across Barbados could cruise down it, blasting “Shut Up and Drive” before reversing course to do it all over again.